Search
Home Stories from the Mountains
Return to Previous Page

It is not everyday that you get a chance to witness a rainbow. And when you see it twice over, one on top of the other, the feeling is absolutely exhilarating.

My friend and I were visiting the village of Kanji in the west region of Ladakh, about 170 kms from Leh, to check the route towards Zanskar over the Kanji La Pass(5200+m). It had been raining all night a day before and the last stretch of the route to Kanji village had been broken in many places due to water from the side ravines. We reached Kanji by late noon with some difficulty, getting off from the vehicle at bad patches.

A while after we reached it started raining. When the rain stopped, and the sun came out we could see one rainbow. After clicking some pics we settled inside since it had started to drizzle again. In just about half an hour, there was some cheering outside. We walked out to check the reason and there it was  – “The Double Rainbow”! One of the most pleasant sights in the Himalaya. The barren landscape and the lush green farm fields added  just the right contrast in the background.

The grassy patch serves as a campsite for camping groups visiting Kanji.

Kanji can be reached by driving on the Leh-Kargil-Srinagar highway which happens to be NH1(National Highway 1 of India), till the village of Heniskot. From here we take a left diversion and drive another 10 Km inside a magnificent gorge section to reach Kanji. It is difficult to believe that such a big valley exists at the end of this gorge.

Kanji is a small, rustic village in Ladakh surrounded by high rocky mountains. Although situated just 10 kms inside from the main highway which connects it to Leh, it is much primitive compared to other villages of Khalse. Most of the houses in the village are very old and have been built primarily using mud and wood.

There are multiple treks that begin from Kanji. The popular ones being the trek to Zanskar across Kanji La and the one towards Photoksar. Kanji is also famous with ski-touring groups in winter. 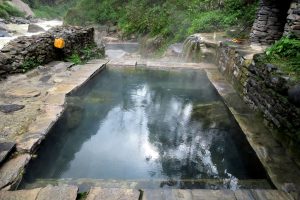 Stories from the Mountains
Read more

Chilling in the Hot Springs of Jhinu

The oh, so inviting hot springs at Jhinu inside the Annapurna Sanctuary  I must have been there for more than an hour. It was ultimate…